The BC chapter of Women in Communications & Technology (WCT) hosted the first of their Lessons in Leadership Series, “The Best Advice I Ever Got,” in the beautiful Chartwell Room at the Four Seasons Vancouver on May 28.

After a networking hour complete with cocktails and delicious canapés, a panel of three high-profile Vancouverites shared with an audience of interested professionals some of the valuable guidance and counsel they received that helped them shape their own successful careers as leaders.

The panel boasted the likes of: Jessie Adcock, Chief Digital Officer at the City of Vancouver; Evan Jennings, Digital Media Infrastructure Specialist at Bell; and, Maninder Dhaliwal, Vice President Philanthropy, Pacific Autism Family Centre Foundation. Clare Hamilton-Eddy, Vice President, Peak Communications and Membership Director at WCTBC, did a stand-up job moderating the panel and including snippets of her own career here and there – which happens to include over a decade of leadership experience. 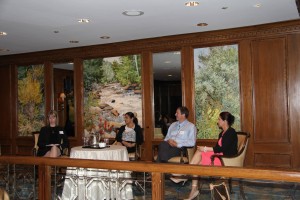 Though there were several commonalities between all three panelists, each of the speakers brought their own unique flavor to the event. With these differences came a remarkable dynamic, not to mention a breadth of advice on how to lead more effectively. And, the ‘best advice they ever got’ speaks volumes to their individual personalities.

Evan told the crowd that the best advice he ever received was from his late grandmother: “Don’t be late. Always be on time – and, if you can’t be on time, be early.” He said that essentially, when you stroll in late and/or keep people waiting, you’re saying you don’t care – which we can probably all agree is pretty career-limiting.

Jessie said it’s important to be confident about yourself and your skills, and to be assertive: “When you’re at the table, know that you have something to offer. You set your own worth.”

Maninder’s biggest piece of advice is to be authentic and have humility. You have to be real to be respected. She also commented on how important it is to listen – to really listen: “Put your phone away and give the person you’re with your full, undivided attention.”

When the panelists were asked what it takes to be a great leader, their answers ranged from confidence to courage to recognizing team members. Jessie added that a true leader is bold enough to make hard decisions. And Jessie and Evan were quick to agree when Maninder explained that perhaps the most important thing to remember when you’re leading people is, plain and simple: “Just don’t be a jerk.”

She went on to explain that when you’re a leader, everything you do and say has disproportionate impacts on the people who report to you. You can’t snap at one of your employees because you had a fender bender on your way in – that’s your problem, not theirs – but they’ll take it as they’ve done something wrong, and it damages the boss/employee relationship.

An audience member asked for advice in dealing with employees who resist change, which Evan stepped up to the field. “At the head of every dysfunctional business is a peace monger,”  he said. Evan explained that while being a successful leader means caring for your people, if you try to keep every single person in your company happy, things will inevitably head south. You can’t keep everybody happy, but you can work toward a common understanding.

Another audience member asked Maninder for advice on finding a mentor, to which Maninder replied that it doesn't necessarily need to be a formal process – she said that a mentor is simply anybody that can teach you something you don't know – you can have several of these people in your life. And they don't have to be your senior, either; Maninder claims that one of her mentors is a 17-year old girl. She also learned how to use Twitter from a 21-year old. And if you check out Maninder's Twitter feed, you can see she learned it well!

There were several other valuable pieces of wisdom that came out of the panel:

Jessie, Evan and Maninder all managed to keep the intimate crowd of about 50 laughing, nodding in agreement, and tweeting sound bites to hashtag #wctbc all evening. When the panel rounded up, guests continued to chat and mingle before heading home.

The WCT is an organization that is dedicated to empowering women in communications, digital media and technology fields to achieve professional success, to aim higher and be recognized for their achievements.

By day, Sarah Clark is a communications manager at Telus. Outside of work, Sarah volunteers with YES! Vancouver as their Communications Director, where she is responsible for leading the strategy and implementation for YES’ internal and external communications, including e-communications to Members, web content and all social media activities. In the little spare time she has left, Sarah lets her creative juices flow by providing graphic design and social media consulting services. When she's not at work or online, Sarah enjoys spending time with family and friends, traveling, skiing, checking out live music, cheering on the Canucks, and trying out new restaurants.
View all posts by Sarah Clark →

Solomo Media and Why Digital Marketing is Dead
SociaLIGHT: An Event Review