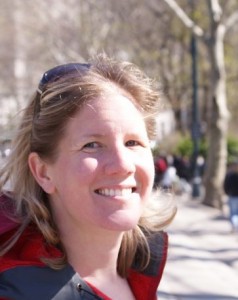 On supporting women: During my time in Africa, I had a chance to meet and work alongside some incredible women who were playing key roles in some of the most difficult contexts in the world, despite enduring unspeakable violence and tragedy. They were helping not only other women, but entire communities to become more peaceful and stable to secure the future of their children. When I returned home, I realized that although women's rights here are more advanced, we still have a long way to go. Women represent over half the population, yet in 2011, women remain absent, under-represented or misrepresented at the highest levels in the most important decision-making institutions in Canada and internationally, including in board rooms, in media and film, in parliament, in provincial legislatures, at the United Nations, and elsewhere.

A few keys ways we can help to change this are to strengthen awareness about the why and how we have gotten here, identify and address the barriers to women's effective participation, and to provide women with great mentors and positive role models. There are a lot of bad role models in the media these days. It really doesn't help.

About Peace Geeks: I started Peace Geeks because I can see that a lot of people out there are interested in helping to work on issues affecting people and communities around the world, but either can't travel to those places or they just don't know how to get started. Peace Geeks allows students and working professionals to stay at home and contribute their skills and time to technology, communications and other projects. These projects help partner organizations around the world who work on the promotion of peace, accountability and human rights to better do their work and have the greatest impact in their communities.

We are about to start working on a project with a Cairo-based organization called HarassMap that is tackling the social acceptability of sexual harassment in Egypt. We are currently recruiting web designers and developers (Drupal, PHP) for this project. Anyone interested in getting involved can email me at renee@peacegeeks.org.

How wonderful it is that nobody need wait a single moment before starting to improve the world. (Anne Frank)

Recommend: I love TED Talks. Here are a few of my faves on women's issues.

Madeleine Albright: On Being a Woman & a Diplomat

Sheryl Sandberg: Why we have too few women leaders (in Business)

Zaina Salbi: Women, War and the Dream of Peace

Movies: Pray the Devil Back to Hell – This is a powerful documentary film about the Liberian women's movement and the key role women played in ending 14 years of civil war; Leymah Gbowee – whose story is featured in the film) was one of this year's Nobel Peace Prize recipients.

Books: “Half the Sky” by Nicholas Kristof and Cheryl Wu Dunn (about key issues affecting women and girls around the world, along with action you can take to help address these issues) Also, “Iran Awakening” by Shirin Ebadi (about an Iranian lawyer and activist who has worked at risk on promoting social justice issues in Iran) is excellent.

Role Model: My Mom. For everything. And my Aunt Doris, an intrepid adventurer and romantic. Doris entered and won sailing competitions at a time when women weren't supposed to sail, who met and married her husband after knowing him for three days and who then crossed the ocean to join him in the UK on a US naval ship in 1942 in the middle of the battle of the Atlantic.  More

Every Networking Event Has A Silver Lining
Friday, March 23rd