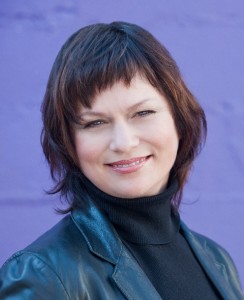 Name and title:  Sandy Garossino, Businessperson, Lawyer, Community Advocate and CEO Intellex Legal Project Management
Tweet, tweet! @garossinoOn supporting other women:It's essential that women support each other.  Anyone who works with effective women knows what a joy and pleasure this is.  This is true soft power, not only because it's not only a great way to get things done, but because it is also one of the most effective ways of amplifying our  influence.  Think about it–women are generally terrible at blowing our own horns, but we sure can do it for each other.  So we should follow our nature and do it as often as possible.  What goes around comes around.  It really does.

How Sandy gives back: Whenever possible I mentor young women, and as much as I can I work with women.  Which isn't hard because doing both are among the great pleasures in life.

If you want the power to change things, you have to be fearless.  My hero is Steve Jobs.  Even when he failed, and he failed spectacularly, he never wavered in that quality.
Words to live by: