By Chelsie Aichelberger on August 14, 2014 in Event Reviews

On the evening of August 8th beneath the streets of Gastown, Axiom Zen, a start-up tech company that employs a young and bright group of creatives in the technology community welcomed employers and grads of Lighthouse Labs, an 8 week coding boot camp based in Vancouver. Attendee’s of Lighthouse Lab’s “Demo Day” event were provided with food, drinks and good company. Within the hour, we were asked to be seated for a presentation of four project demos that grad students had completed during their time at Lighthouse Labs. 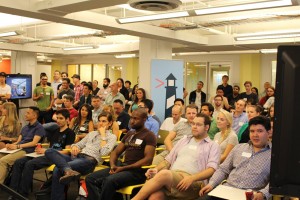 First up was the demonstration of a game that Lighthouse Labs graduates Stefan Reindl and Warren Russell developed called the Mechanical Jerk (and when I say developed, I do mean thought up, created, built, and launched… all in 8 weeks!) This game entailed playing against a friend or stranger in your browser with in-game chatting and interaction.

Next, two young ladies Romila Barryman and Amber Spencer demonstrated a dating app that blew Tinder out of the park. Detailed algorithms were used to match users based on their personal interests. It also sets up your first date for you so you don’t have to!

Following, graduates Alan Hsu, Chris Nagra, and Rene Sauve presented their plug-n-play security camera solution that includes a cross-platform web application. With this camera users can view and adjust a live video stream that will start and stop recording based on detected motion.

Last but not least, Clarence Ng, Megan Ryll, and Mika Kalathil demonstrated a program to facilitate online learning and teaching by providing users with virtual classrooms and collaborative tools. They called this application Educ8. 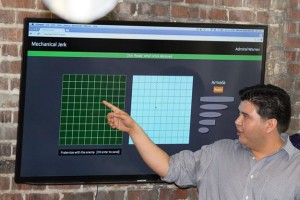 As a professional with a very different background, exposure to this type of talent was eye opening for me; it was incredible to see the applications these young graduates had developed.

Chelsie Aichelberger enjoys working in a fast-paced, dynamic marketing and communications role. Currently, she is the Marketing Manager for the North American division of Vector Aerospace – a helicopter maintenance, repair and overhaul company. At Vector Chelsie develops and implements annual marketing plans and is involved in high-level strategic planning to help Vector reach its company goals. Born and raised in Victoria, BC, Chelsie loves the outdoors whether she is hiking, camping, surfing or on a long distance run.
View all posts by Chelsie Aichelberger →