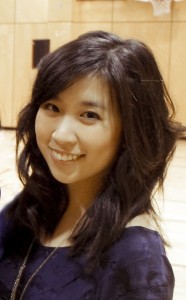 On supporting other women: The technology industry is evolving, but the advancement for those who need it the most, like the visually impaired, has been stalled for too long. Unfortunately, women face a significantly greater risk of vision loss than men, as statistics show that two-thirds of blind people worldwide are women. It is important to acknowledge this and provide assistance to these people as much as possible.

In the case of the Canadian National Institute for the Blind, the support of each member is most crucial and appreciated. Each member has come from different paths in life, and the severity of their impairment varies, but they are all very well connected with each other, female members in particular. The loss of sight meant that their regular lives would be changed forever, and despite how sudden and devastating the change can be, many CNIB members not only persevered, but took strides to help others. The women whom I have had the honour to meet and connect with have helped others cope with the transition of their impairment by sharing their stories and empowering them through discussions and workshops.

The women at CNIB are already supporting their peers and deserve some support of their own. Their stories have greatly touched and inspired me to use my skills to support and aid their daily lives, even in the smallest way. I want to be a catalyst in bringing useful technology to them.

How Stephanie is trying to make a difference: Since September 2010, I have been working in a team of four to develop a project called Point Locus, a tactile and wearable way finding aid, specifically designed for the visually impaired. This project is used by both men and women, however, through this project, I got the opportunity to meet and be inspired by the women involved in CNIB. Through close observations of their daily lives, we were able to make major decisions in the product. In fact, we designed Point Locus to complement their natural adaptations to their disability and extends their limitations with the intention of making independent travel accessible to them.

On Thursday, March 8th (International Women’s Day), I spoke at Utopia: 2nd Annual Festival of Women in Digital Culture to a group of 14 women about my journey of becoming a creative problem solver, the process of designing Point Locus, and the issues of wearable technology today. Through this tech talk, I encouraged and inspired these aspiring women in the technology and fashion industry to realize the need for assistive technology and how our unique perspective could benefit these industries.