By Gayle Hallgren-Rezac and Judy Thomson on July 24, 2012 in Networking Tips 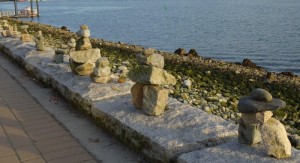 Vancouver has a reputation for being an unfriendly place, but is it just some kind of bad urban legend? In the lead-up to the 2010 Olympics the organizers thought we needed some help in this department. They were busy giving speeches encouraging us ‘to smile’ and ‘give the world a hug.’ Smile? Hug? Are you really serious? We’re from Vancouver! We are friendly, but huggers and smilers–not so much.

Then we surprised ourselves during the Olympics. Vancouverites started talking to strangers, wearing bright ‘Rah-Rah-I-am-Canadian’ clothes and even smiling at other Vancouverites! The best place to witness this ‘phenom’ was on SkyTrain. The new and improved Vancouverite 2.0 went out of our way to help tourists find the right stop, and we even talked to one and other on the trains.

That amazing Olympic spirit seemed to come to a grinding halt the day after Sid the Kid’s legendary goal. We were on the train to a downtown meeting the morning after Canada’s hockey team won the gold and we witnessed a stunning reversal. Everyone was back to black, and had withdrawn into their little personal cocoons. It was less than twelve hours after a fairytale ending to an amazing Olympics and all that goodwill and friendliness stopped dead in the tracks!  Today that spirit seems like a fond and distant memory.

We teach networking skills to a lot of people who come to Vancouver from other places in Canada and around the world, and they often tell us that it’s hard to make friends in our city. (Last week we heard that Victoria is a much friendlier place than Vancouver.) A recent survey by the Vancouver Foundation seems to prove this point. One-third of respondents said that Vancouver is a difficult place to make friends. “And most people said they don’t socialize with their neighbours, while nearly a third maintained that they have little interest in doing so.”

“The coldest cities and people on the globe”

The Vancouver Sun’s recent series, Growing Apart, based on the Vancouver Foundation research, said this about Vancouver: “it seems Vancouver and its people might be described as among the coldest cities and people on the globe.”  Ouch.

We’re not asking that everyone start hugging strangers or begin walking around with a crazy perpetual grin, but wouldn’t it be great if more people in Vancouver stepped out of their iPod induced personal cocoons, and stopped using the Caspar Effect. The Caspar Effect? That’s when people won’t make eye contact with you—it’s like you are not there (Caspar was a friendly television ghost in the Sixties).  This blog quote from Manager Tools explains what we are talking about: “I'm walking in an office building, in the public spaces or in a client's office. I'm in an airport, or at my local grocery store. I'm at Wal-Mart. And, because I pass close to someone, near them, walking by, standing in line, our eyes meet. And they look right at me, know that I see them, and they don't smile. It's not ‘not rude' if you're ‘not the smiling type'. It's not ‘not rude' if you find it ‘uncomfortable'. It's rude ALWAYS. This is the price one pays for being in public spaces where you can feel reasonably safe and secure. Civility is the grease that distinguishes us from animals in the wild.”

Simple things to be more engaged

So what do you think?

One Response to Just a Bad Urban Legend?