By Tamara Von Dohren on August 1, 2013 in Event Reviews

It’s a Friday afternoon, work is done for the week and I’m dressed in smart white pants and a royal blue blouse ready to enjoy the evening on the 6th Annual Pacific Club Monte Carlo Boat Cruise.

Being my first time at a Pacific Club event, I wasn’t sure what to expect or what age group the crowd would be, but I was pleasantly surprised to find a diverse friendly group who were all out to mingle and enjoy a relaxed evening watching the sun set on the water.

As we left the pontoon at the end of Denman Street, the bouncy beats of the DJ on the main deck got the party atmosphere started as we sipped our drinks, admiring the views from the boats upper deck. This was where those who had come alone met those in small groups and everyone became friends, talking more about their lives than just ‘what do you do for a living?

As we came around Stanley Park, the entertainment began with professional salsa dancers who made us all jealous with their smooth moves, and a fantastic magician who had about fifteen of us glued to his every movement. I’m still trying to work out how on earth he got that deck of cards in my hand to turn into a solid block of glass! 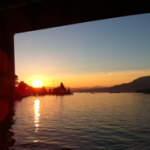 With no specific speeches, it was really all about meeting new people and kicking back at the end of a long working week, and I had a great time meeting some very interesting people from retired entrepreneurs passing out guidance to budding business brains of the future, to the lively girls from Vancouver Fashion Week and even a TV producer and diamond importer. The fact that this event was set in such a relaxing environment (think cruising along English Bay, cocktail in hand, as the sun sets behind you with the bright tents of Bard on the Beach to your right) it really got people to loosen up, and rather than the night being about ‘work talk’ it became a fun social gathering of like-minded business people getting to know each other on a more personal level than the typical networking event allow.

For those interested in joining The Pacific Club they are currently calling for new members. The club is not-for-profit and hold regular speaking events with past guests including Brian Burke, President and GM of the Canucks and Glen Clark, VP of the Jim Patterson Group and Former Premier of BC.

A media and events professional for the past 10 years, Tamara has worked as a PR Consultant, Wedding Planning Assistant, On-Air radio personality, Music Director and is currently the Senior Promotions Coordinator for CKNW News Talk 980 and AM730 Traffic as well taking on the role as Corporate Event Planner for CORUS Radio Vancouver. Tamara is also a published author with her debut novel 'Daughter of the Moon' produced by Influence Publishing, where Tamara is also an event planning consultant working with her fellow authors to produce their dream book launch events.
View all posts by Tamara Von Dohren →

TICKET GIVEAWAY: The Art of Marketing on September 17th
What are the best Networking Events?