By Jen Schaeffers on June 2, 2011 in Event Reviews

Can a girl be a Waterboy?
BC Lions Annual Waterboys Breakfast at Hastings Racecourse
Blog post: Jen Schaeffers, Founder, NetworkinginVan

Coming from a career in professional sports I have heard rumblings of the infamous BC Lions Waterboys breakfasts for a long time…and no, I am not talking about Bobby Boucher.  For those of you that don't know, the Waterboys are a dynamic group of British Columbia business leaders engaged in building the BC Lions Football Club's brand and relationships in the corporate community.

I was lucky enough to be invited to their annual Hastings Racecourse Waterboys Breakfast on May 31st by Jamie Pitblado, VP of Promotions & Community Investment for the Vancouver Sun and The Province. The breakfast networking group is an exclusive and invite only crowd – mainly comprised of well known senior business leaders in the community, there is much history to this club and you can feel it just being there.

I had heard I may be one of the few women there, but in a crowd off approx. 200, there were about 30 women – a significant increase from previous years I was told. Myself and a gentlemen sitting beside me joked that they may need to rename the group to the “Waterpeople”.

As I was getting checked in I was definitely impressed by the set up and crowd. Red Robinson, John Ashbridge (voice of the Vancouver Canucks at Rogers Arena), Suzanne Anton, Moray Keith, Wally Buono, Stu Ballantyne and Dennis Skulsky were just some of the faces I recognized immediately. I also appreciated the pom-pom waving BC Lions Felions directing me into the right parking lot – who doesn't like brightly coloured orange pom-poms first thing in the morning?!?

The setting was absolutely breathtaking. The sun was out bright and early at 7:30am when I arrived, which was welcome as the breakfast was held outdoors. I have never been to Hastings Racecourse and was kicking myself that I hadn't. What an incredible setting!! The mountains in the backdrop, the horses out running laps around the track, the smell of bacon and eggs…hmmmm. I didn't actually want to leave! I sort of felt like I was transported into “Pharlap” or “Seabiscuit”, hearing the sounds of the horses warming up on the track, it was incredibly enchanting. 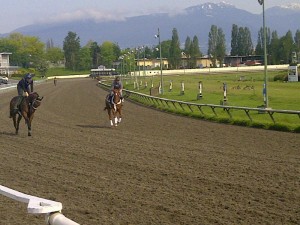 (Horses up for an early morning run)

The crowd was welcomed by Dennis Skulsky and Wally Buono and his coaching staff then took to the podium, talking about their offensive football plays and sharing more insight with the crowd about what really goes into producing a winning football club. It was great to see many of the current BC Lions roster there enjoying the morning and breakfast.

The networking opportunities are definitely there, but I must admit I was a little bit intimidated of this crowd – something that I am normally not. I am hoping that if I have the chance to attend another event in the future, I will get outside of my comfort zone a little and reach out to more people. I need to follow my own advice! 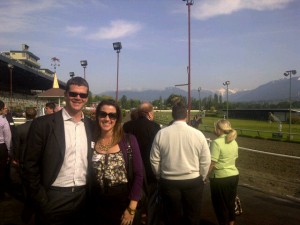 (One of my previous bosses, Chris Falloon from FanlinQ and me!)

So if you would like to attend a future Waterboys breakfast and get involved with the club, then I would definitely ask around and see if you have a friend who is a member that can invite you as a guest. It is a wonderful group to be a part of and a great opportunity to support the BC Lions and the team behind the Grey Cup 2011 Vancouver!