By Marie Hunter on June 29, 2013 in Business Development, Event Reviews 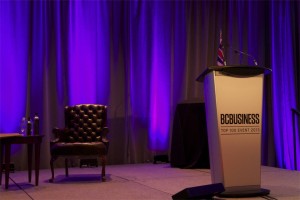 So, what is there to learn from legendary Vancouver businessman, Frank Giustra?  Interviewed by BC Business Magazine publisher, Peter Legge, at their Top 100 luncheon event on June 26, 2013, at the Fairmont Hotel Vancouver, he shared with an audience of several hundred, stories of his varied career and the insights he gained along the way.

He regaled us with tales of his early life, growing up with teenage aspirations of one day becoming the Night Manager at the local SuperValue.  He spoke of his epiphany to become a broker and the pivotal advice that his father’s broker gave him to get the best training he could when he first started out in the business.  He spoke of the lessons he learned about finding the right management team and trying to do too much too quickly when Lions Gate Entertainment was struggling to survive in its formative years.  He shared with us his love of cooking and the events that lead to his latest venture into premium olive oil and his interest in modern food movement.  But mostly, he focused on his passion for philanthropy and how the turning point in his career came after a 2005 meeting, and subsequent joint initiatives with former US president, Bill Clinton.

Throughout the interview, he dispensed pearls of wisdom about leadership and success, and I’ll share those with you in a moment.  However, if there was just one message Frank wanted us to take home, it was this:

“If you truly believe in something, then you can absolutely achieve it.”

This philosophy was borne of his exposure to Napoleon Hill’s seminal treatise ‘Think and Grow Rich’ and the key messages he took in regarding faith, desire and persistence.  They have been at the root of his success in all of his ventures, and held him in good stead when many around him advised him to throw in the towel.  And this tied in closely with his corollary advice:

“Never let anyone tell you that something can’t be done.”

Had he listened to those around him during the toughest times, he would have left London before learning what he needed to learn to establish a resource group at Yorkton Securities, the sector that is responsible for the creation of most of his personal wealth.  He would have filed for Chapter 11 bankruptcy protection for Lions Gate Entertainment before he could assemble the management team that would grow it into the largest independent film and television distribution company in North America.  And he wouldn’t have met with Bill Clinton in 2005 … a meeting that changed the focus of his life, not to mention the lives of those who have been touched by his many and diverse philanthropic initiatives.

The common thread that runs through all of his entrepreneurial ventures is that he is passionate about all of them.  He is always involved in things that he loves and checks in with himself with the question, “Am I having fun?”  If the answer isn’t, “Yes!” then he looks for ways to change the initiative or the way he is interacting in it.  The only advice he gives others (he never gives specific advice) is to “Be passionate and love what you do.”

He measures his success, not on the wealth or possessions he has accumulated (though to be sure he has accumulated plenty in his life), but by his ability to lead a balanced life, with ample time for family and friends and adventure.

The best advice he’s ever had, advice that he has lived by to his benefit, came from his father when he was a young man:

Staying out of debt has allowed him to weather the ups and downs of the economy and the stock market, because, he says, “You should never underestimate the extremes of the market.”  If you don’t have debt, you can control your costs and sell assets.  On the contrary, if you have debt, you have to be able to service it, and then you are no longer your own master.

What qualities does he look for in his senior executive team members?  He says he makes sure that he hires people who are smarter than him (he barely made it through high school), who have a personality that opens doors (people do business with people they like), and who have a sense of humour (which becomes especially important during tough times).

His advice for the children of today:  “Learn Mandarin.”

Oh, yes … and he is still very bullish on gold!

It’s Real, It’s Raw, and it’s Unedited: Highlights of the BC LinkedIn Marketing Solutions Event
Networking in Style at the FWE Garden Party